» ALL TOURS FROM Romania

Not finding what you are looking for? Give us a chance to help!

An enchanting self-guided hiking tour in Transylvania, revealing the rural life of the mountain villages in the Carpathian Mountains – the most celebrated mountain range in Romania. This independent walking holiday will take you to heart of Piatra Craiului and Bucegi, the most famous mountains in the Southern Carpathian range. Behold the incredible biodiversity of the Piatra Craiului National Park and the vast pastures of the Bucegi Mountains as you advance through hidden high mountain sheepfolds and medieval fortresses. Be a part of the shepherds’ everyday life and try fresh local dairy products. The incredible Bran Castle will not be left behind, and so will be the traditional culture and historical center of Brasov. 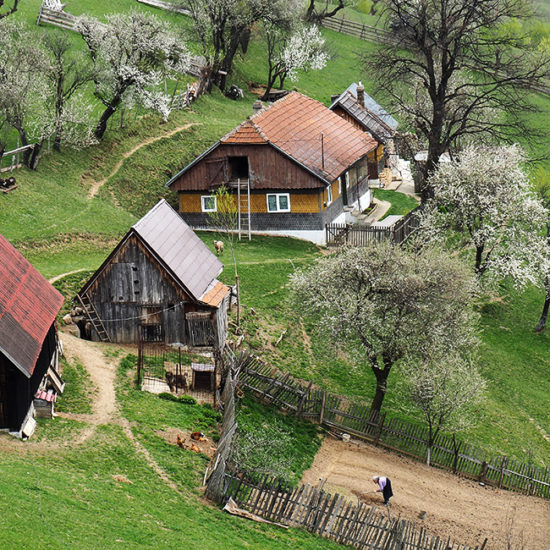 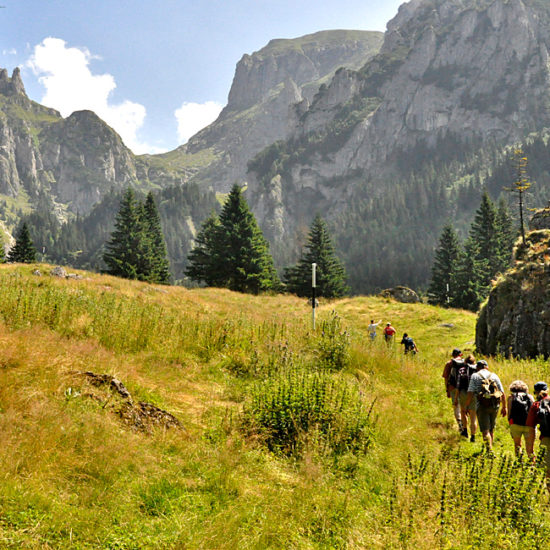 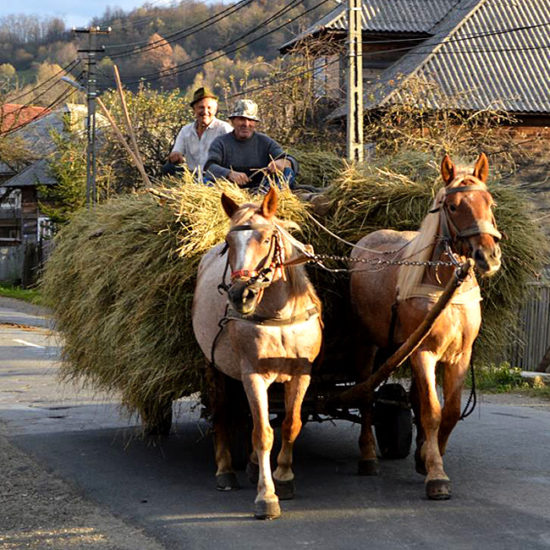 Check the Rates & Remarks tab for hints on how to get to Brasov from Bucharest/Bucharest Airport. Wrapped by the Carpathian Mountains, Brasov is known for its medieval Saxon walls and bastions, the towering Gothic-style Black Church and lively cafes. Here one can discover the story of an exceptional sparkling wine that holds the secrets of the traditional method and will impress you with quality and freshness. Time-permitting today, or on your departure day, you could also join the free walking tour of Brasov (https://brasov.walkaboutfreetours.com/).
2

A morning transfer after breakfast will take you to the famous castle of count Dracula - Bran Castle. You will have time on your own to explore the intrigue and the magic of this wonderful place, built in the 14th Century on a strategic mountain pass, and meant to protect the city of Brasov. You will then be taken to the Magura village, where you will spend the next 3 nights. Check-in your accommodation and leave your luggage. For the rest of the day we have foreseen a short self-guided walk across the beautiful mountain villages of Magura, Pestera and their surroundings, offering great views over the Bucegi and Piatra Craiului national parks. You can choose to make a stop at the oldest guesthouse in the National Park (should be pre-booked at least 24 hours in advance) for some cheese tasting or lunch (appr.10-12 euro/person, payable on the spot).
3

Following the main walking route which links Bucegi Mountains and the Piatra Craiului National Park, you start tracing the isolated villages and smallholdings of Magura and the adjacent collation of farms, houses and cottages. Nestled in the heart of Piatra Craiului National Park, Magura is a picturesque village, where local traditions are still preserved. The hay meadows, the sheep grazing on the alpine pastures and horse drawn carts can be seen on the road along the modern cars. Quite a scenic route, with superb views over both national parks, eventually descending into Bran village, where the transfer vehicle will be waiting for you for a transfer back to your accommodation in Magura village (30min drive).
4

Today’s self-guided walking section explores the Piatra Craiului National Park and offers some of the most beautiful sights in the Carpathian mountains. Piatra Craiului National Park is dominated by a 25-kilometer-long narrow limestone ridge whose highest peak (La Om) reaches 2238 m above sea level. The ridge lies between the Făgăraș Mountains and the Bucegi Mountains. Although this will be a tiring trek, requiring early morning start, this is a really stunning and quite varied in terms of scenery circular route, where you will follow a picturesque trail through the Zarnesti Gorge, lush meadows and dense forests. Have a rest at the Curmatura chalet (1470m) and enjoy the beautiful views of the surrounding area. You will gradually return to the Magura village in the afternoon.
5

Another scenic village route awaits you today (no steep stages; dirt tracks mostly with gentle ups and downs). Starting from Magura, you make your way past farmhouses, small cottages and beautiful traditional houses scattered randomly among the green slopes all the way to Sirnea (the first touristic village in Romania) and further into Fundata village. Situated at an altitude of 1360 m above sea level this makes it the highest commune in Romania. A traditional lifestyle of herding sheep and cows is still preserved here (as in other parts of the area you past through the previous days), augmented by tourism. You stay two nights in Fundata village.
6

A loop hike around the village of Fundata is planned for the day. There are several options for hikes to choose among (easy/moderate difficulty). Once again you enjoy the beautiful landscape with views of the Bucegi Mountains and the wild nature of the Carpathians. Here in the dense forests and cave-rich mountains of the Carpathians, there is still a good number of brown bears (no need to be scary though; chatting with your hiking pal is normally enough for the bears to hear you from a long distance and stay away of your trail) . Day trips are organized from Brasov meant to spot them from special hides (and of course other game).
7

Your last walking day, but arguably the most scenic one, starts with a 30min transfer to the trail head in Bucegi National Park. This 32000 ha region around the Bucegi Mountains is undeniably one of the most beautiful regions in Romania with an exceptionally large variety of rare plants and animals. Dense forests and alpine meadows will follow each other as you start climbing towards the foot of the mountains.  An extension to a waterfall (the Devil's Waterfall) is possible at some point of the trek (1hr round trip). The trail passes also by a sheep farm, where you can make a stop and taste the cheese made on spot (between June and September) for a small fee (or cigarettes :-)). At the end of the trail a transfer vehicle will be waiting with your luggage to transfer you for your last tour night in Brasov (appr. 40min drive).
8

Take the train to Bucharest (it passes nearly every hour) or order a private transfer (appr. 110-120 Euros per car, 1-3 pax) to your hotel in Bucharest or the airport (check the Rates & Remarks tab for further details). 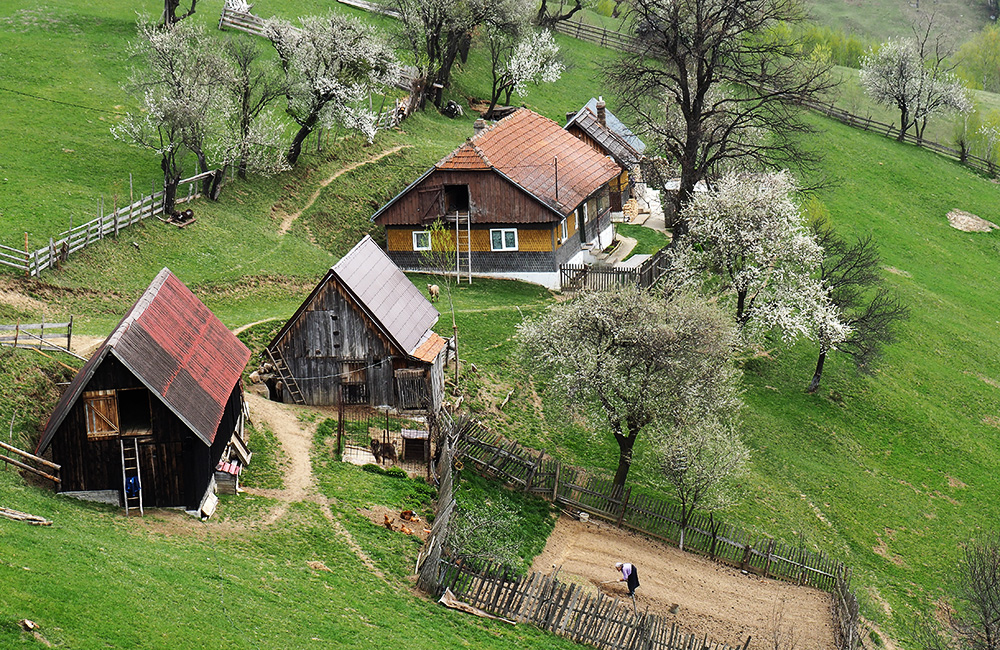 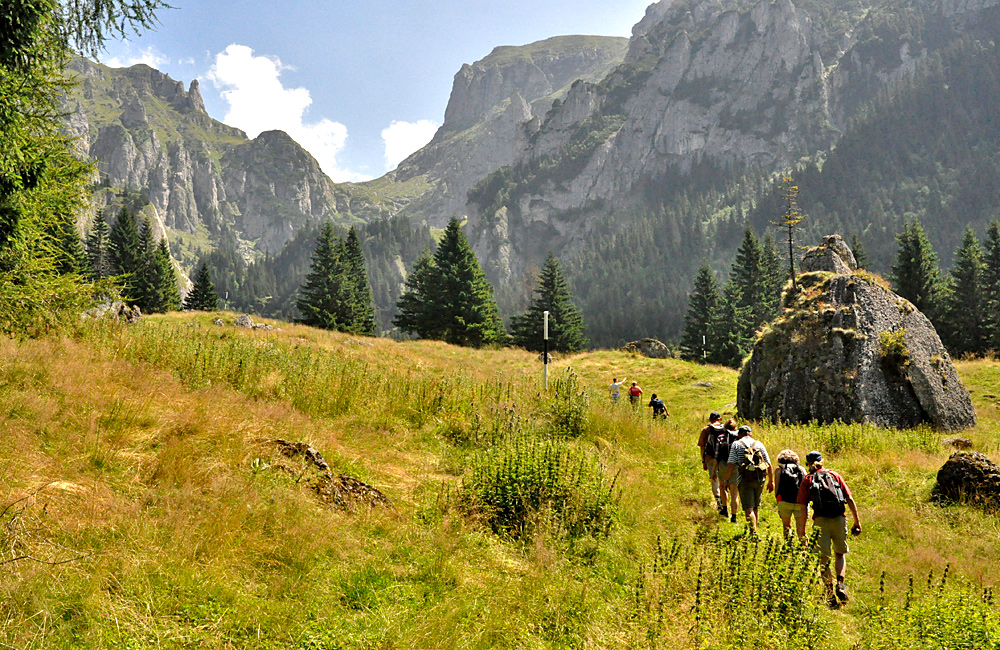 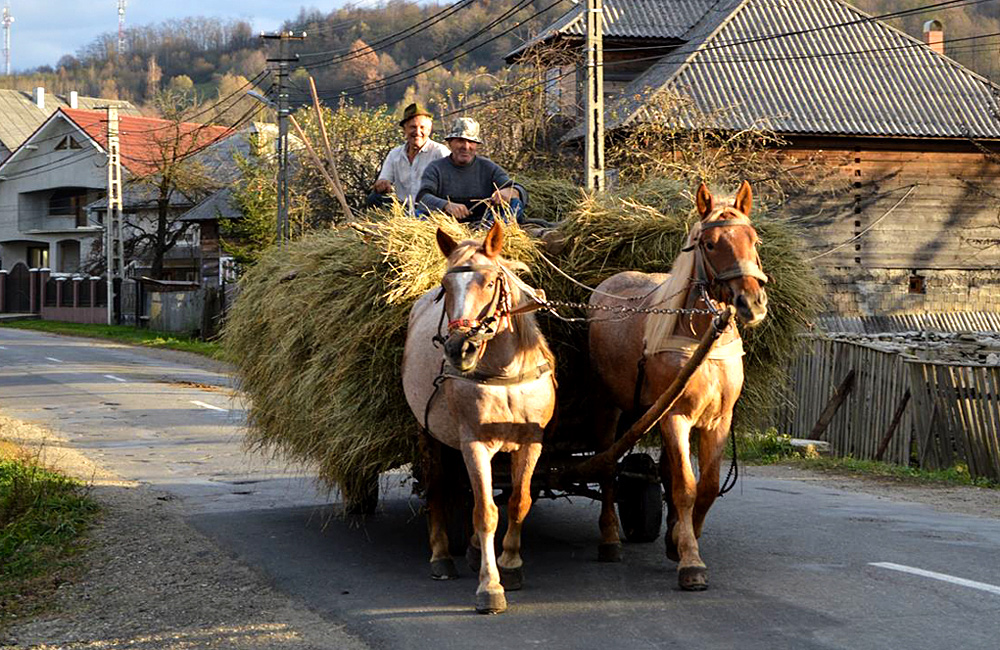 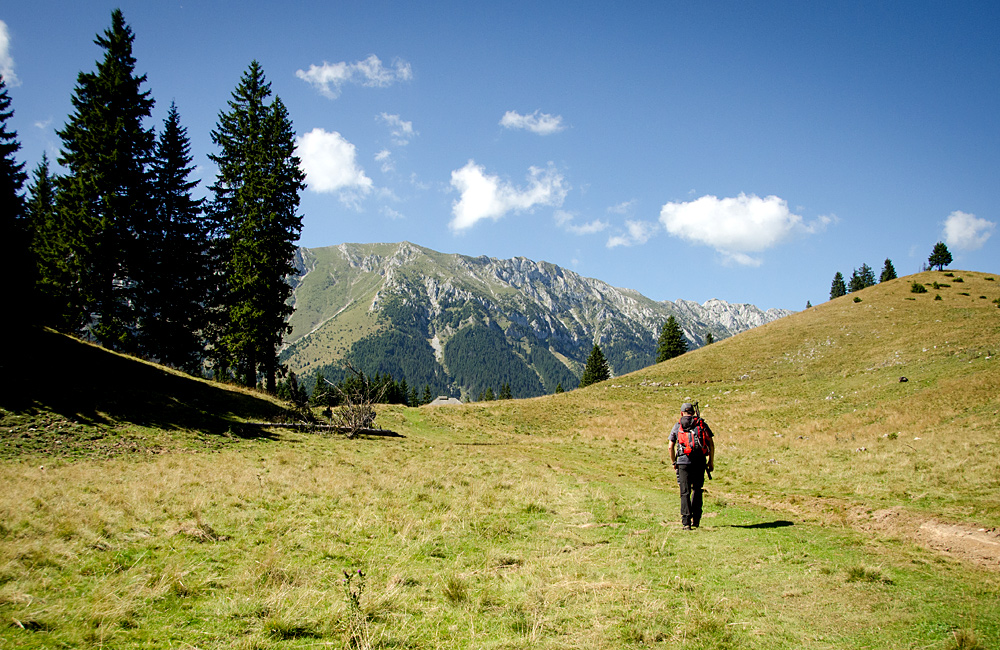 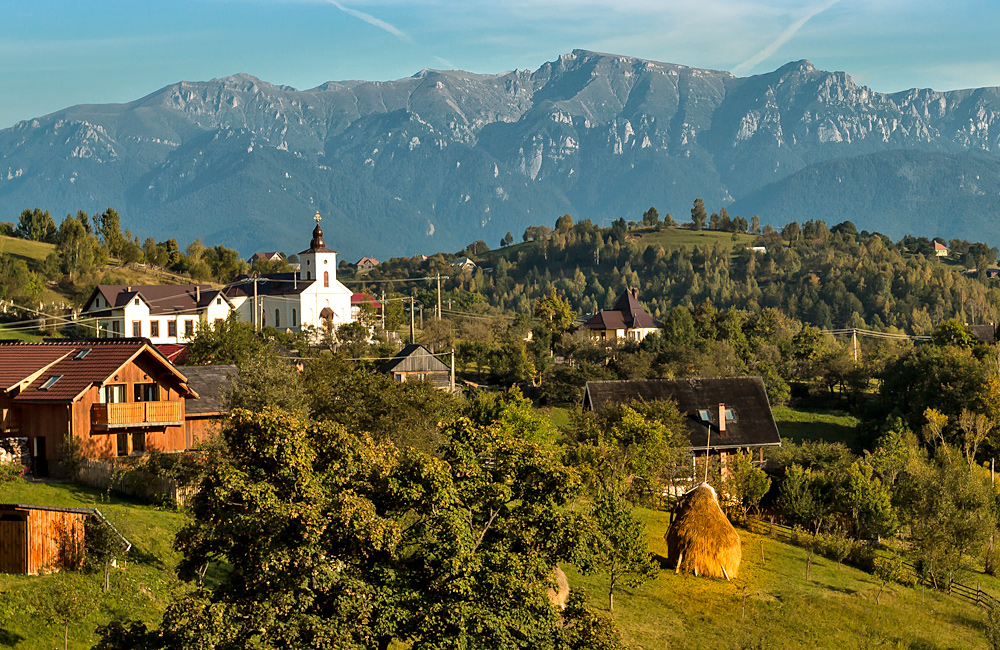 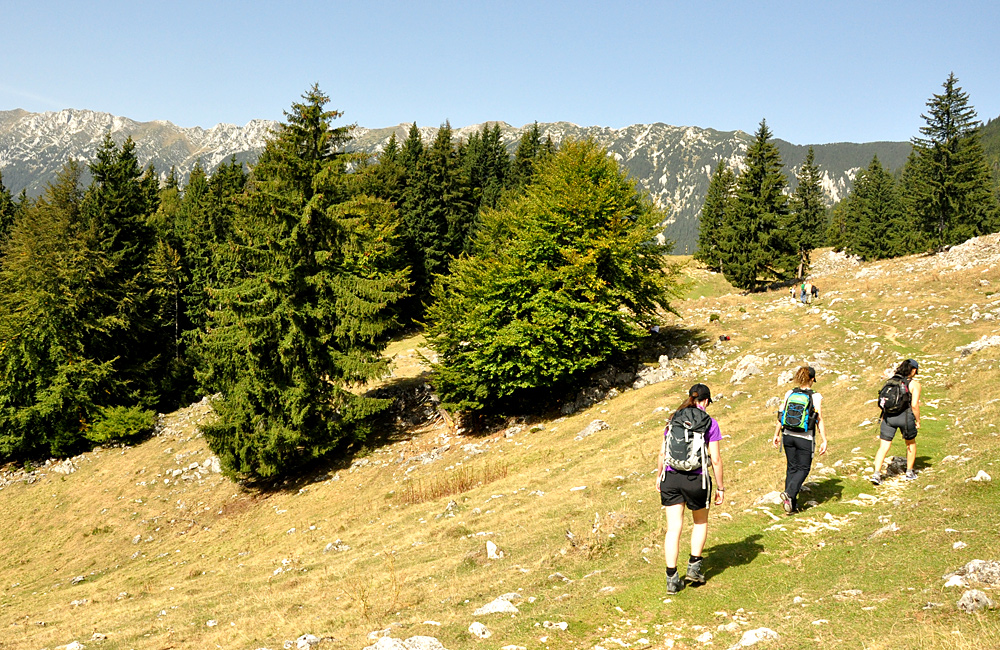 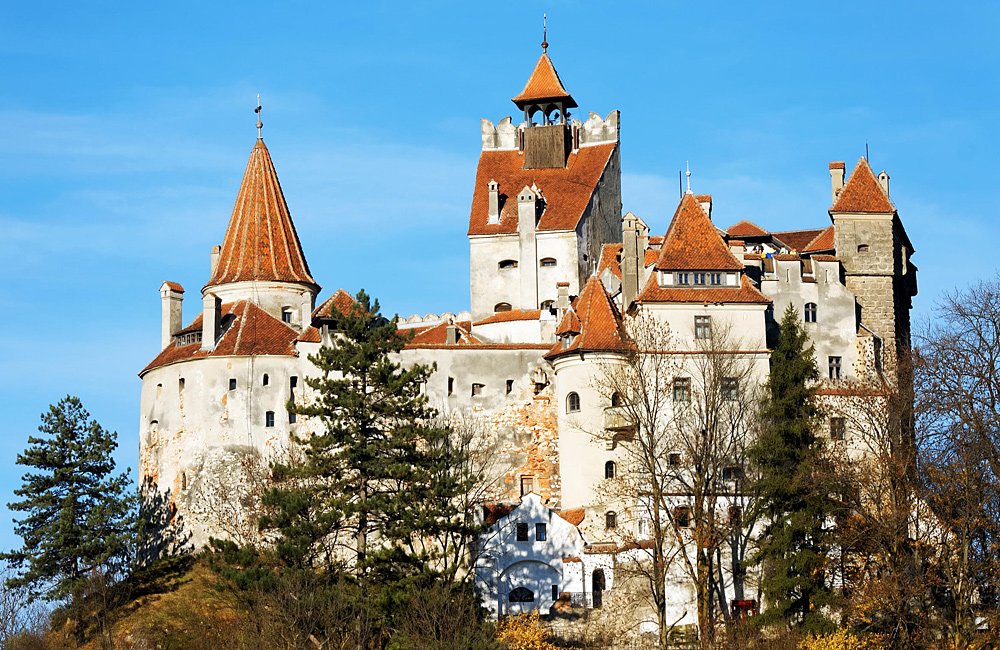 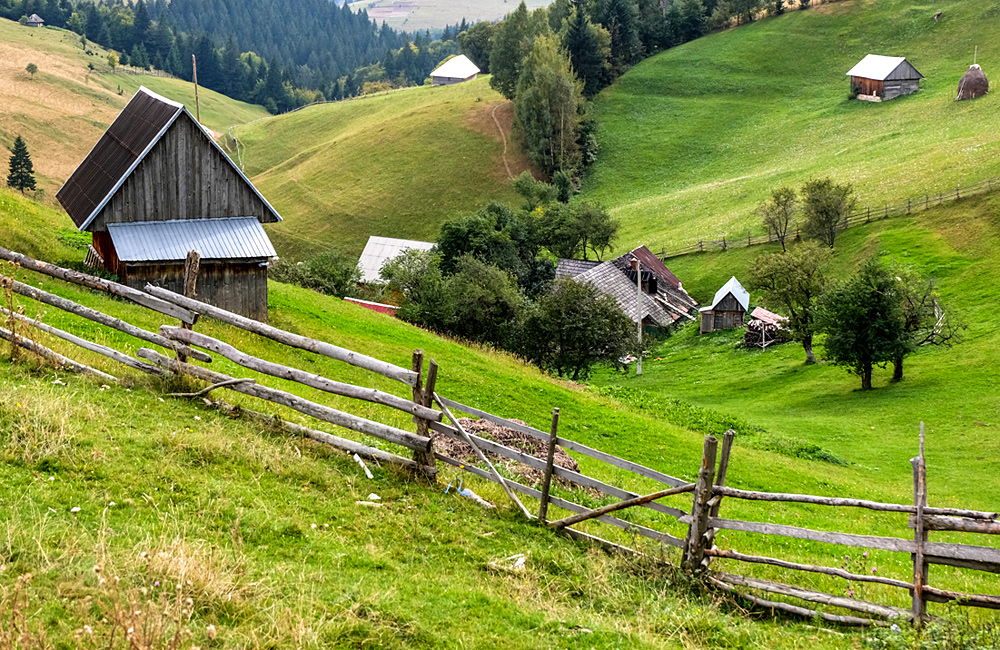 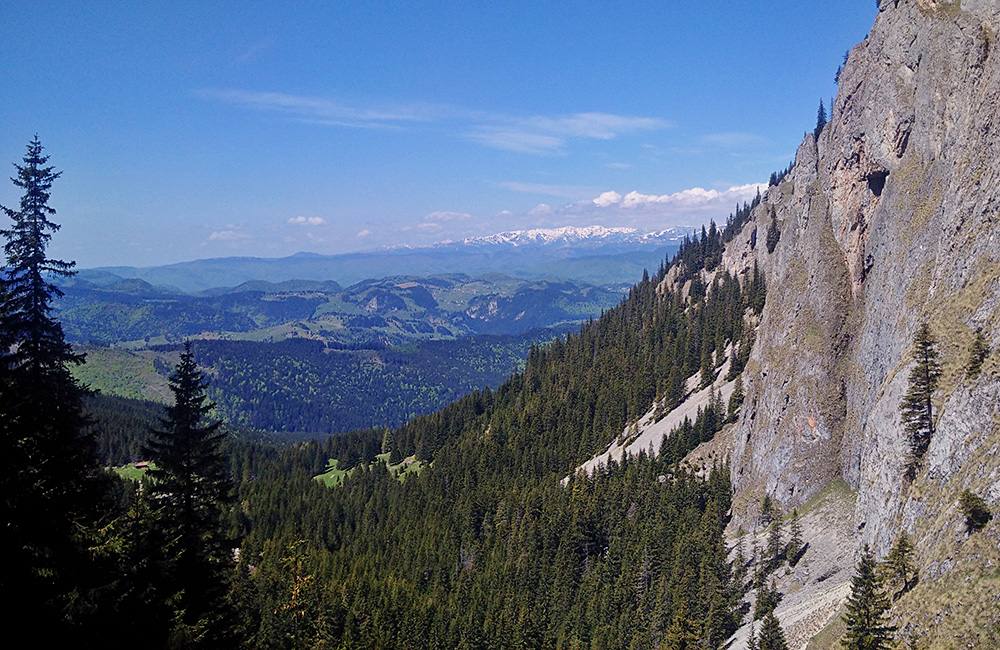 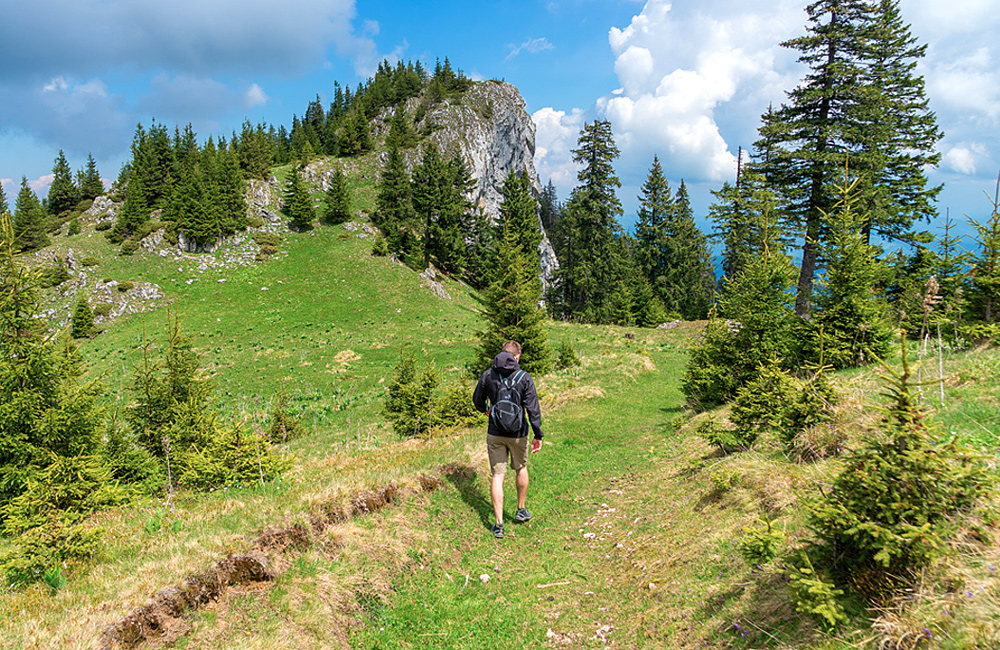 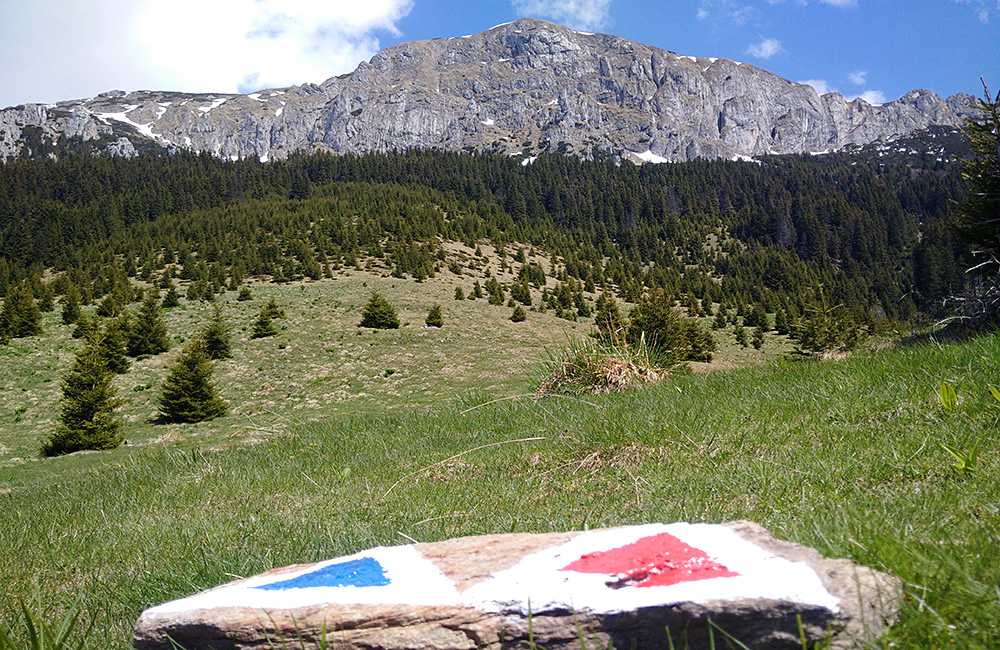 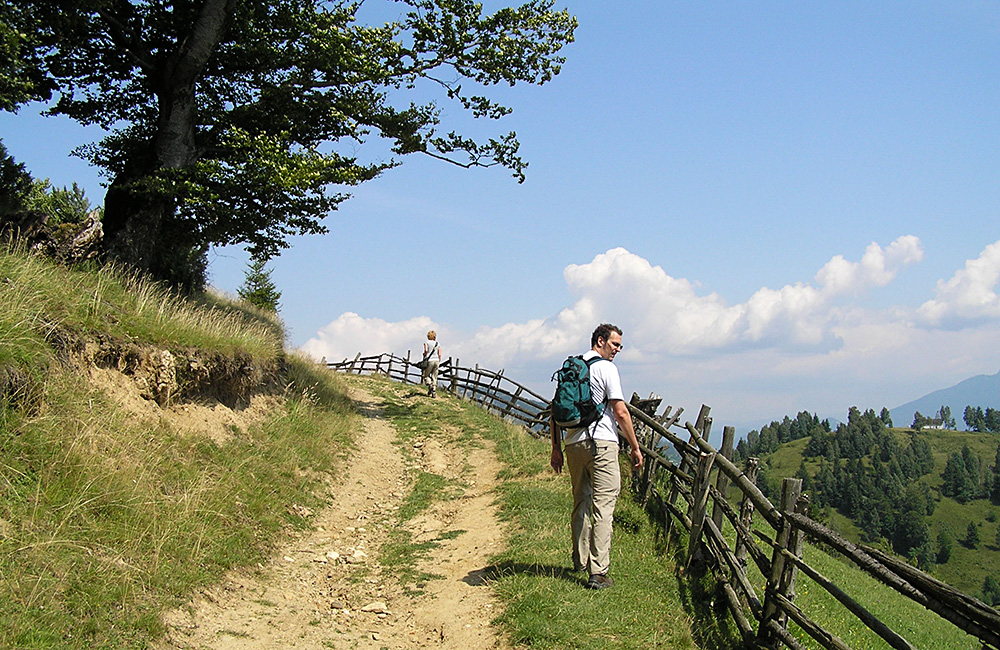 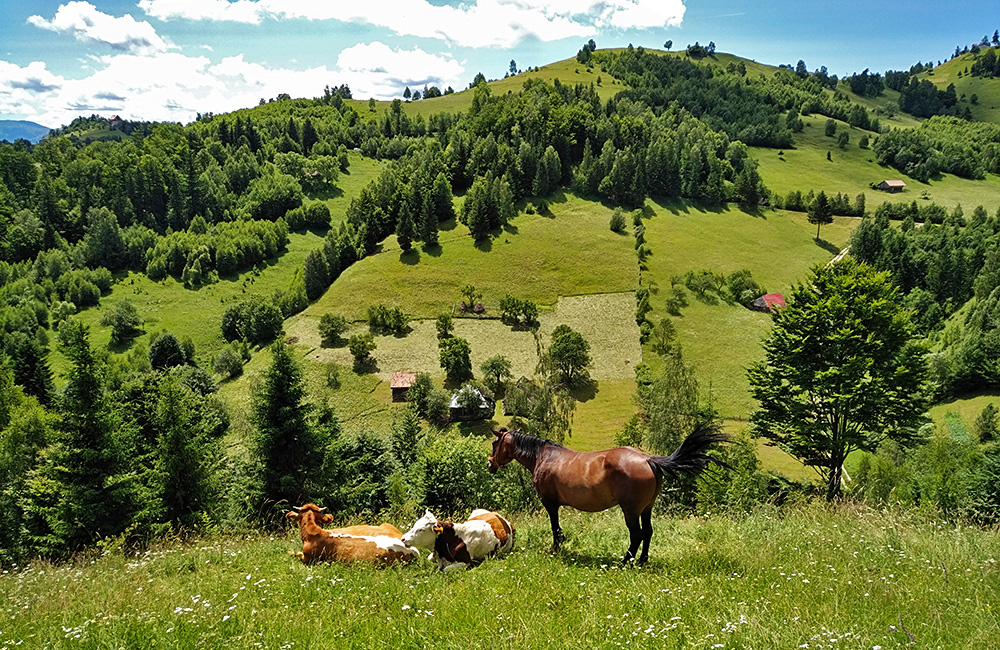 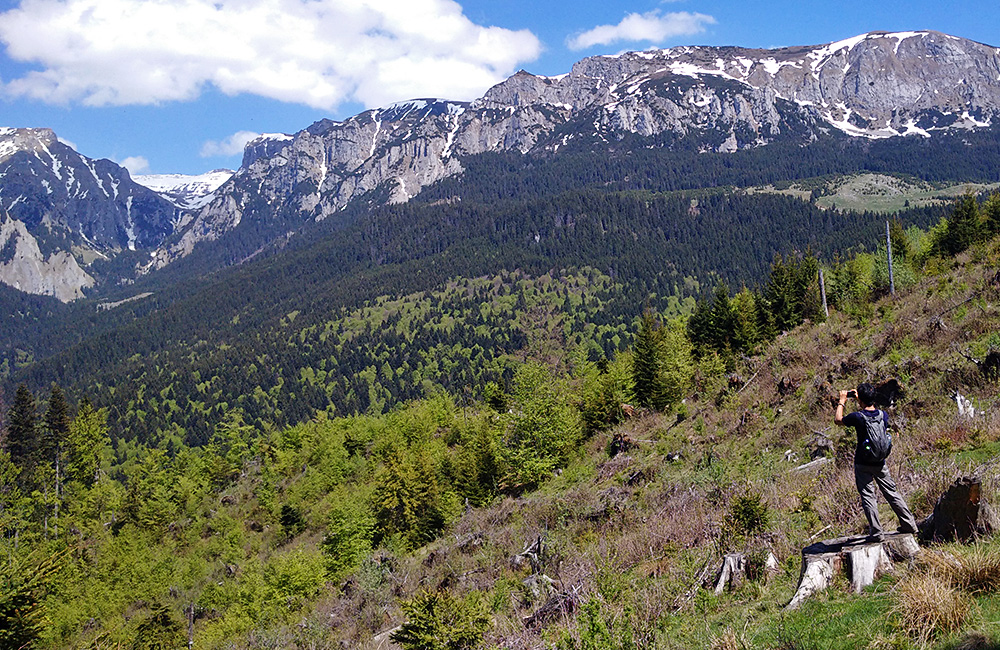 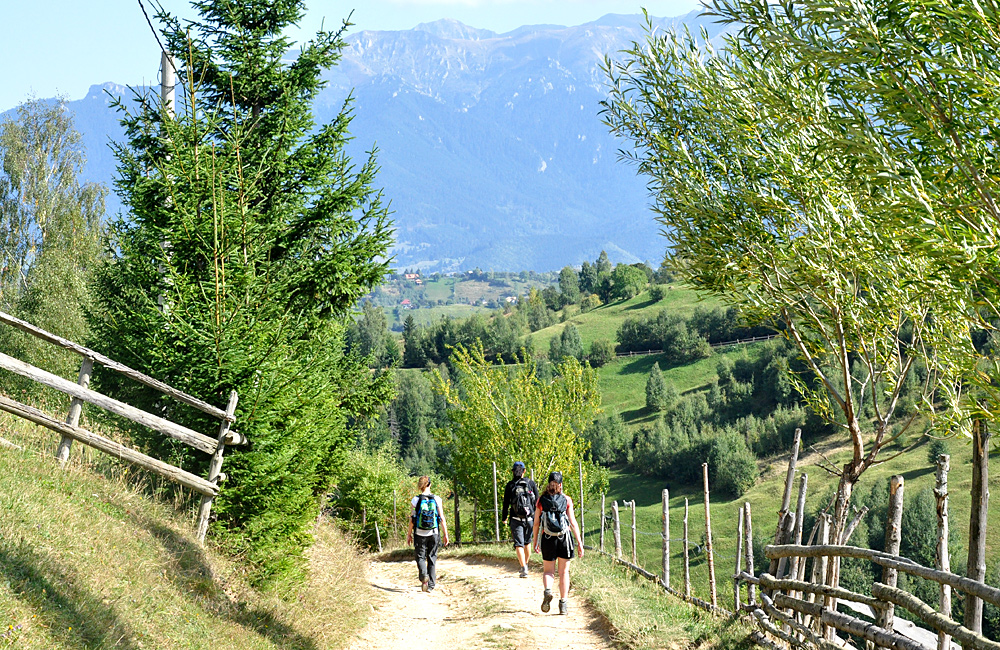 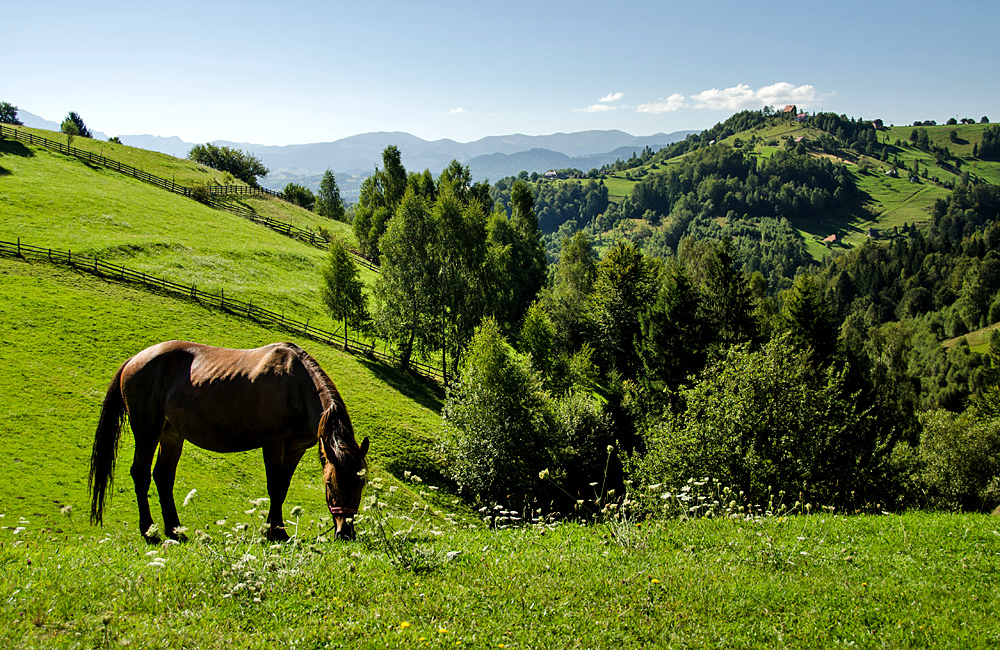 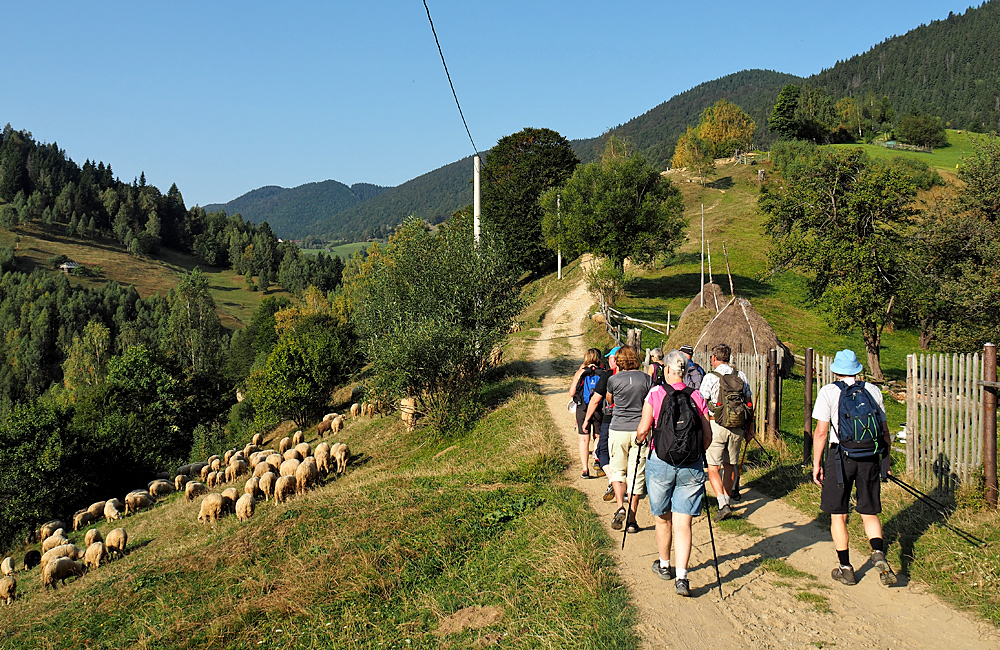 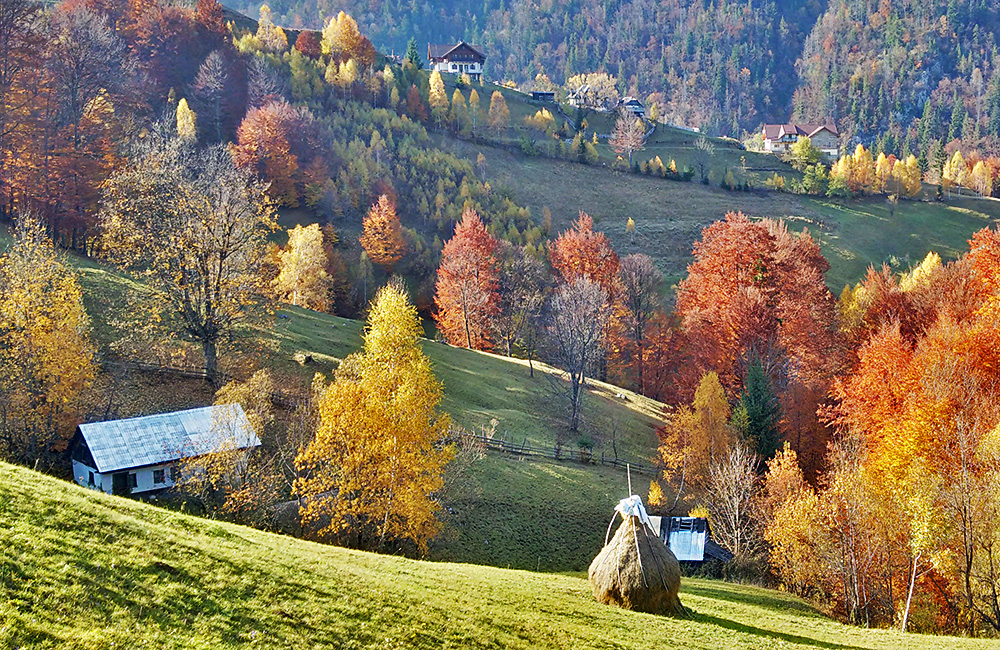 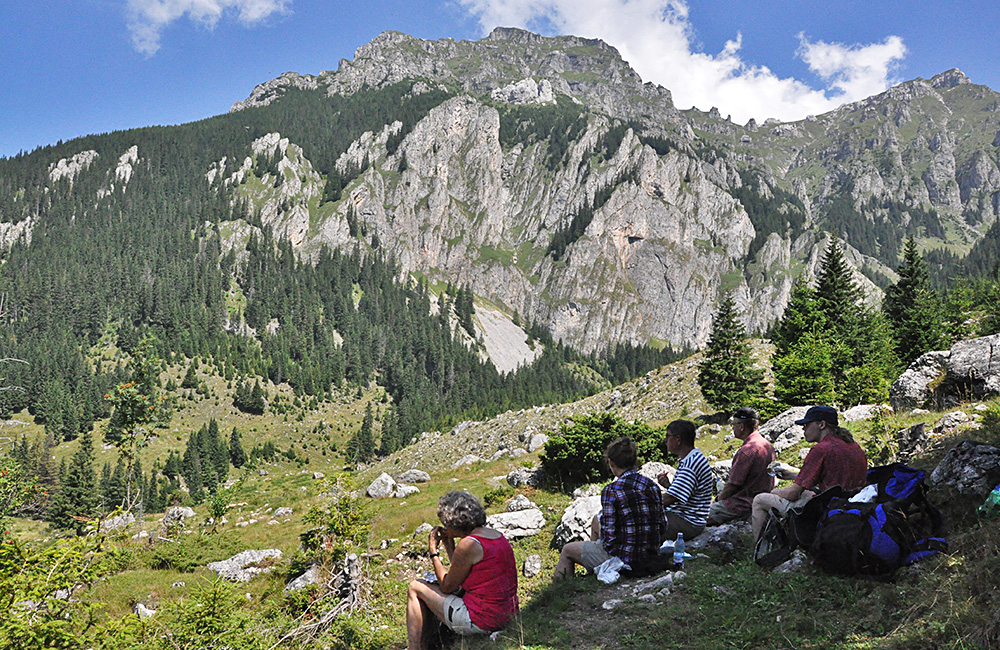 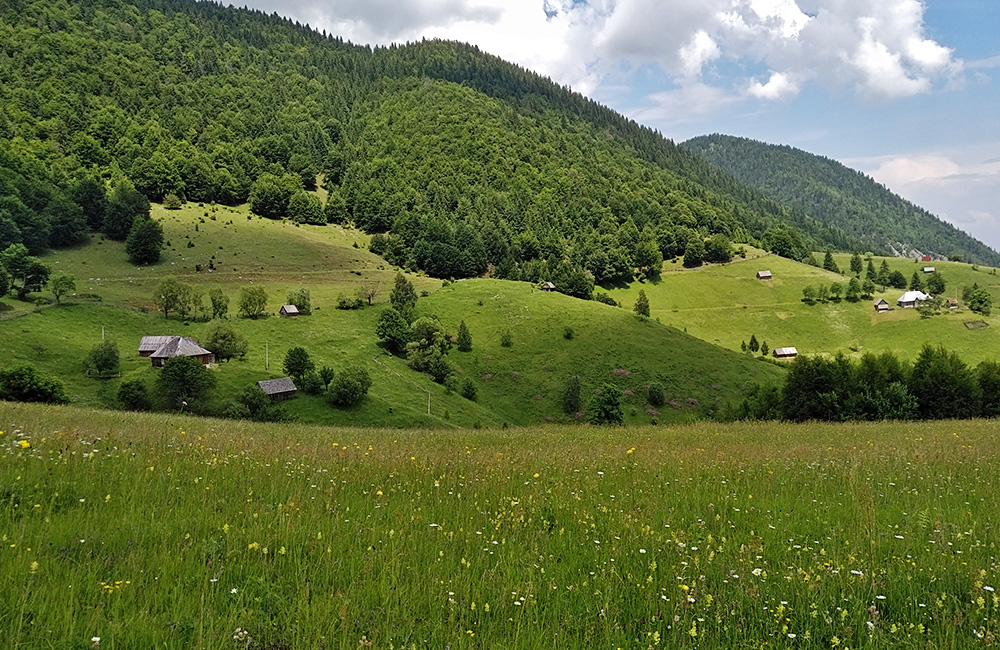 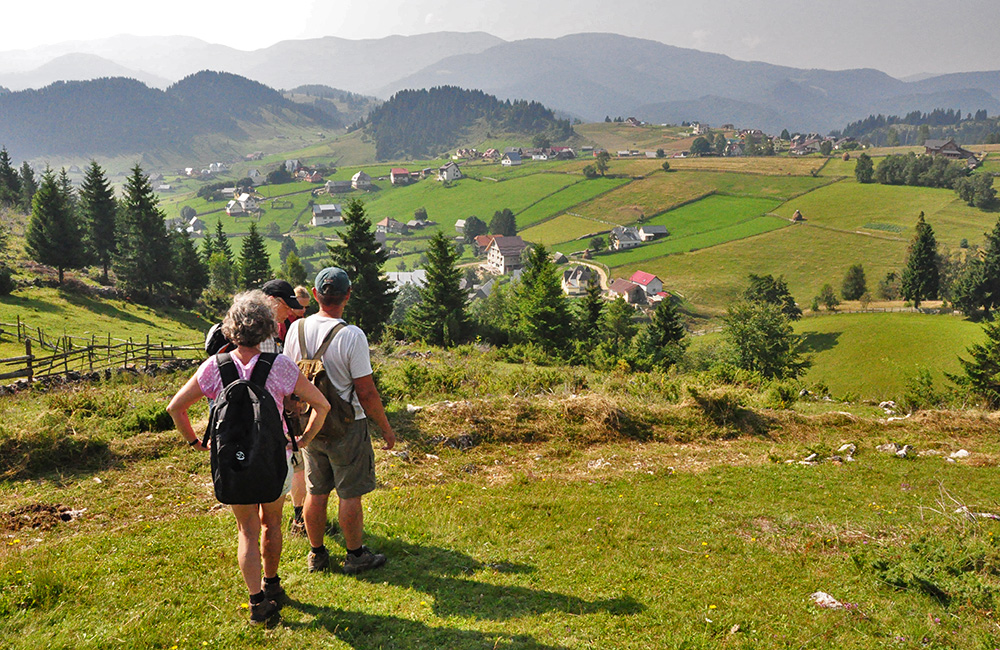 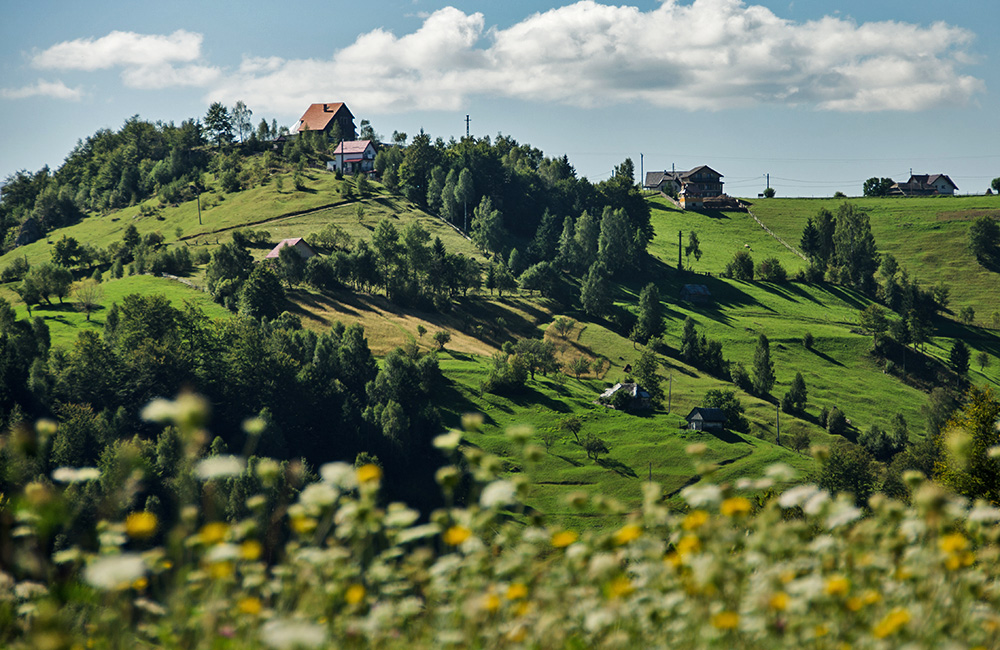 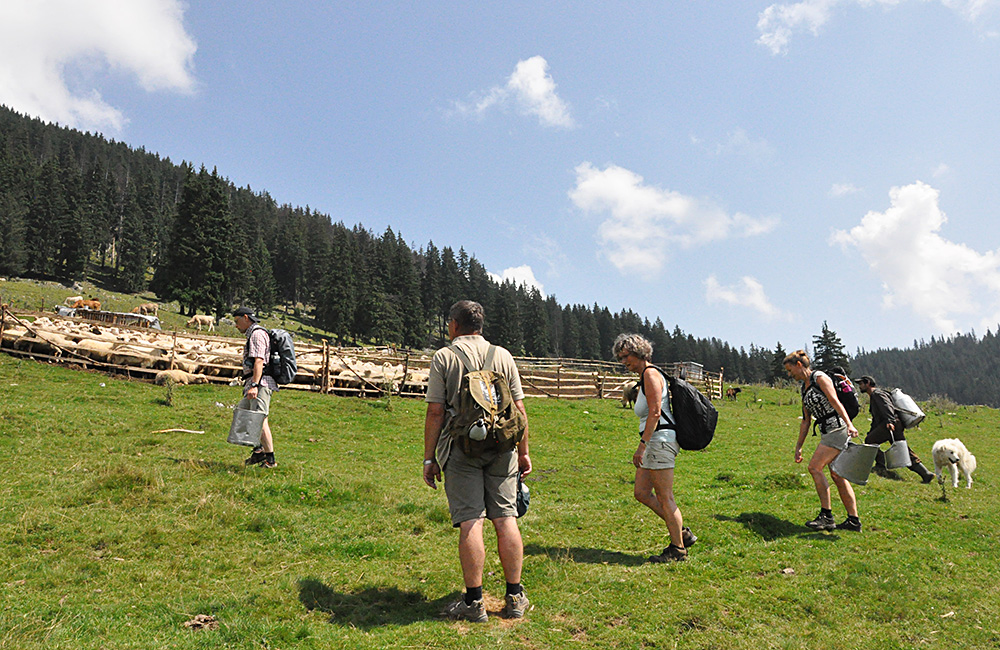 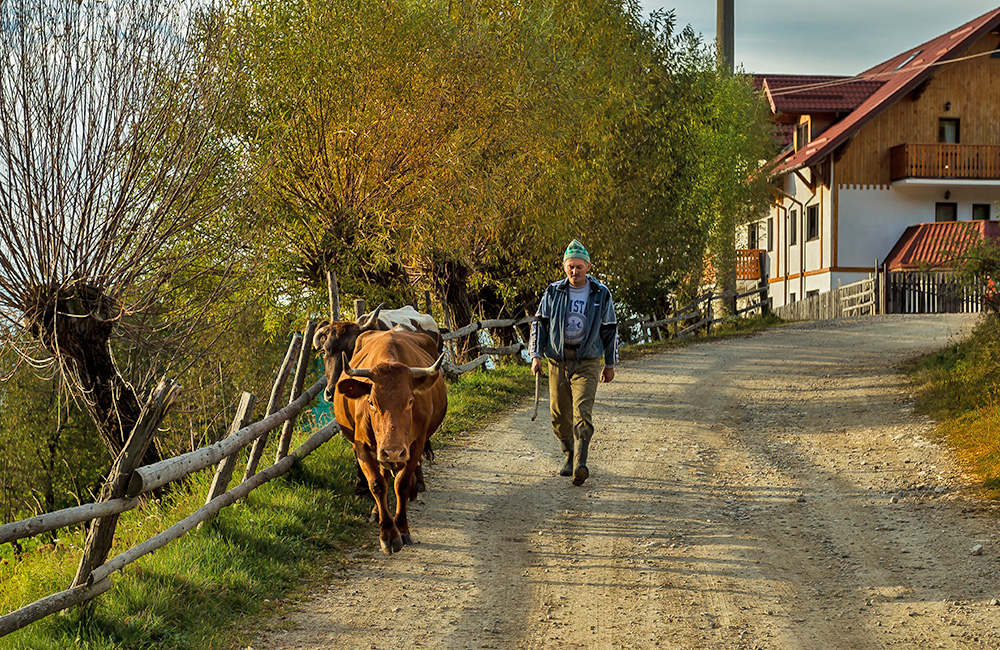 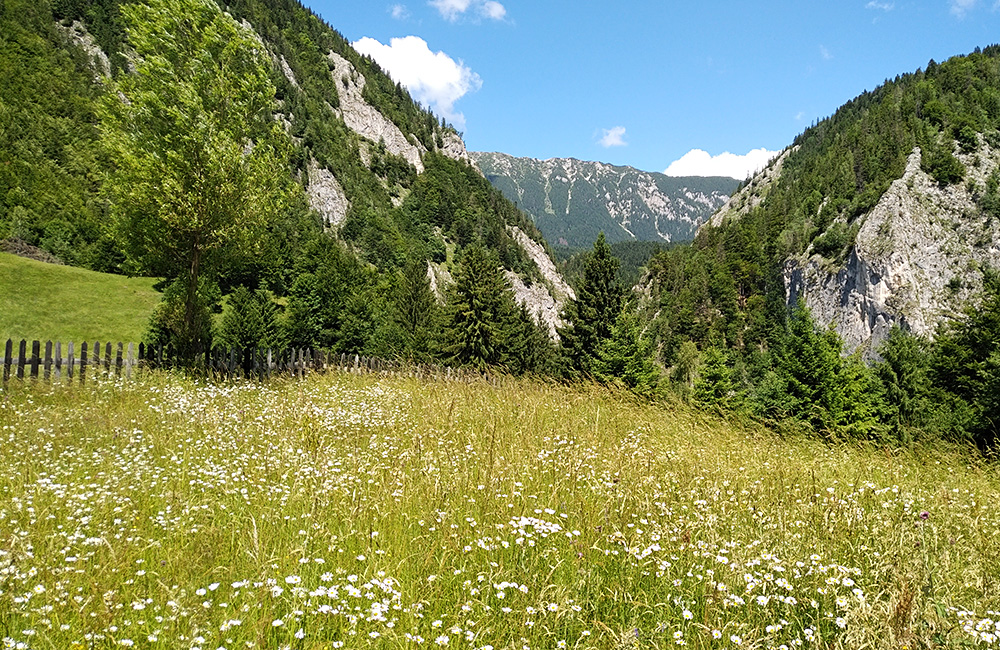 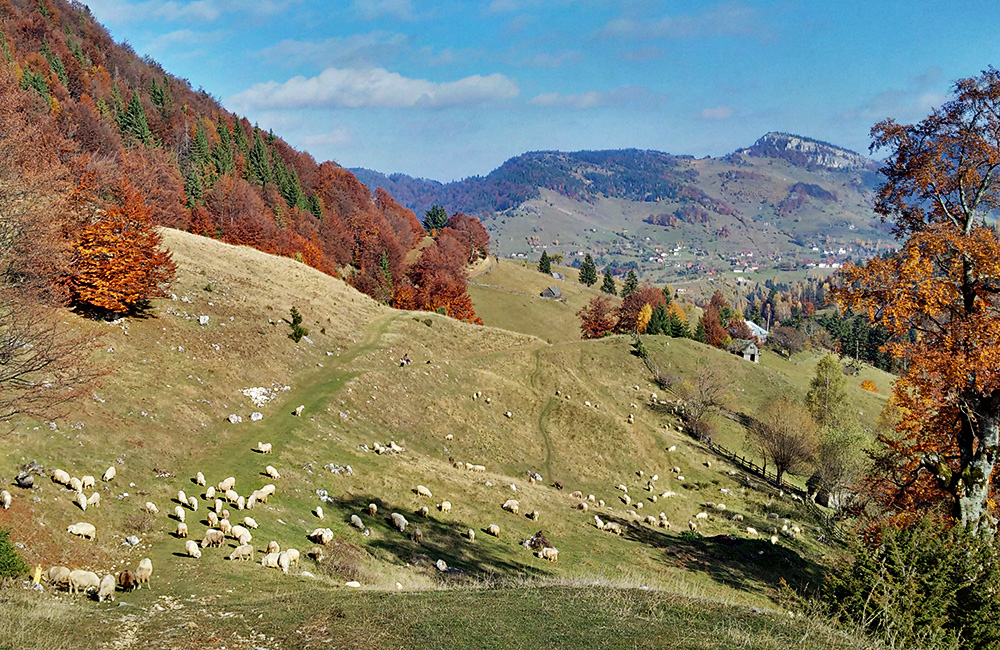 665 Euro per person in twin/dbl room

Daily departures between May and October. Best arrival day in Brasov would be Saturday, as the mountain guesthouses are normally full during weekends. Traveling on other week days may require reservation well ahead of time. This also matches well the working time of the Bran Castle (where you should go on Day 2, or Sunday), which otherwise opens from 12:00 on Mondays. Well-marked trails, part of the Carpathian hiking network. Changing weather in summer, requiring good rain gear just in case. Note that walking in the national parks of Romania means you may come across wild animals, incl. Brown bears. To avoid unexpected meetings, try to speak louder with your travel mates when hiking in some of the most dense forests. Transportation options: Train timetable can be checked on www.cfrcalatori.ro. Shuttle buses from Bucharest Airport to Brasov and back: www.direct-aeroport.ro or www.brasov-aeroport.ro or www.transferairport.ro/ro/. Private transfers Bucharest Airport – Brasov (or vice versa; per car (max 3 pax): 110-120 Euro; per minibus: 180-200 Euro.

Hand-picked family-run inns with en-suite rooms, offering traditional food and hospitality; Breakfast included all days (lunch packs and dinners can be ordered and paid on spot in the accommodations); 5x dinners included for the days 2, 3, 4, 5, and 6.

Send an enquiry about this tour

We use cookies to ensure that we give you the best experience on our website. If you continue to use this site we will assume that you are happy with it.OkPrivacy policy